Not only can holidaymakers expect plenty of sunshine if they’re staying there, but the region is also steeping in history and culture, meaning there’s something to keep people of all ages entertained.

The historic Mediterranean port is the second largest Valencian city and features influences from the Roman, Spanish and Moorish periods.

Alicante serves as a popular destination with cruise ships and is home to an array of enticing museums, historical monuments, waterparks and numerous golf resorts.

Read on to find out more about Alicante Spain and its many eateries, attractions and beaches that you’ll want to explore…

Alicante’s weather plays a major role in its popularity as a tourist destination. Not only is the weather in Alicante warm throughout the summer, with temperatures in the mid-20s from June through to September, but it’s also extremely dry.

Temperatures can regularly top 30°C in July and August and the same months see the lowest levels of rainfall too – with showers occurring on just one day a month on average.

Such is the reliability of Alicante’s weather that you can expect at least eight hours of sun a day from April to September, and up to 11 hours of sun every day in July.

Sea temperatures top 25°Cin July, August and September too, making it perfect for swimming and participating in water sports. 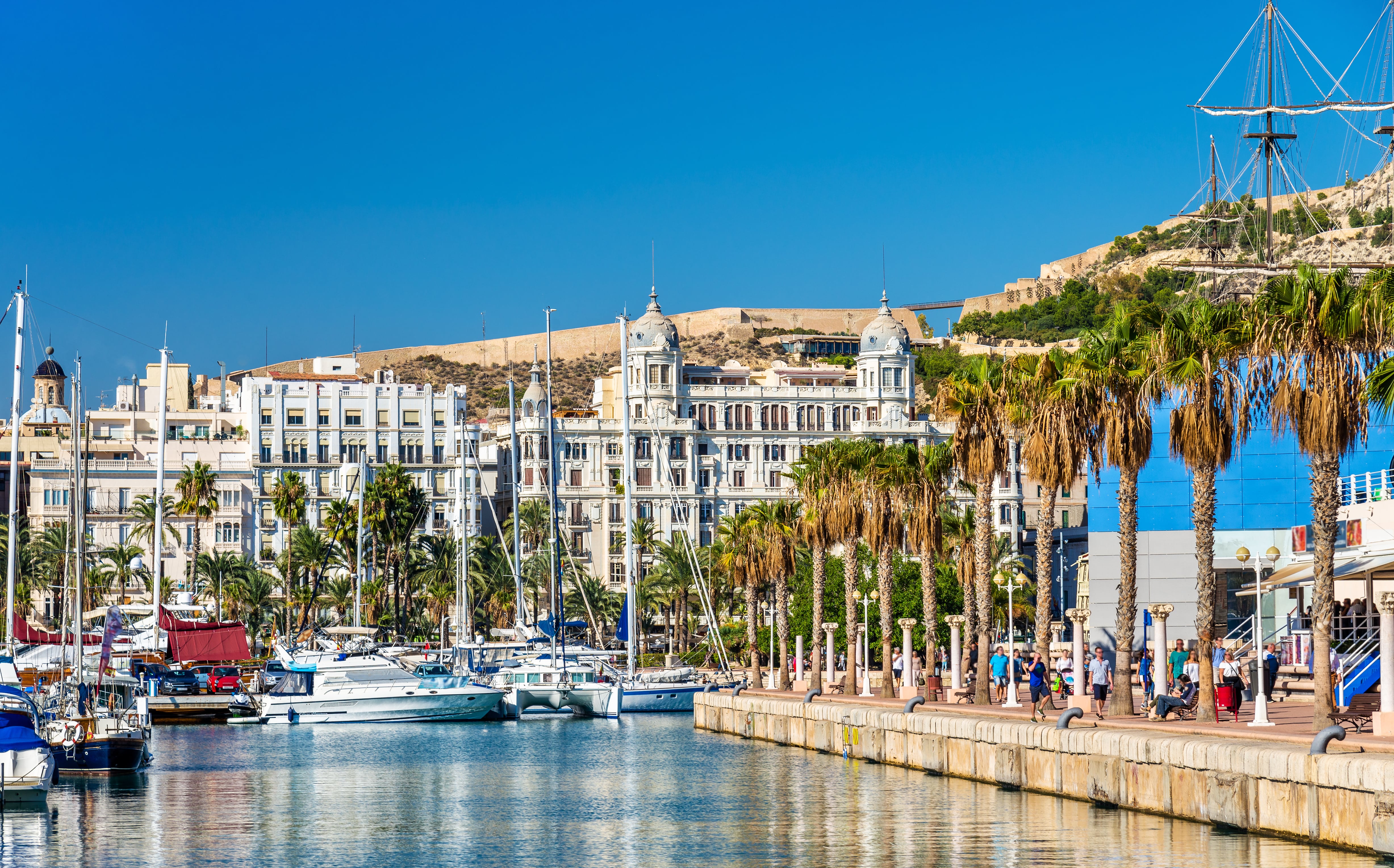 Promenade in the Marina of Alicante

Things to do in Alicante

As previously mentioned, Alicante is packed full of things to do for all the family, meaning you won’t be short of options if spending every day at the beach isn’t your thing.

Aqualandia, Pola Park, Aquopolis Water Park and Aqua Natura are among the many Alicante water park and theme park options that can keep the kids entertained.

Most can be easily reached via the extensive public transport network and have ample parking if you need to park a hire car.

You’ll also find plenty of golf courses in Alicante, with Alicante Golf, Club De Golf Bonalba and Club De Gold Alenda all popular with those wanting to practice their swing in the sunshine!

The region is also popular for shopping, with the Alicante El Corte Ingles outlet selling everything from designer clothes and shoes to bags, cosmetics, electronics, furniture and your everyday basics.

If you’re keen to discover some of the region’s history, head to Alicante Old Town to see quaint properties, the San Nicholas Cathedral and the Contemporary Art Museum.

The latter is one of a dozen museums in the city that focus on the arts, archaeology and history – all are home to stunning collections that detail the eclectic history and culture of the region.

In the centre of Alicante is the Santa Barbara Castle, a fortification that stands proudly atop Mount Benacantil and which is among Spain’s largest fortresses – the views from the top are spectacular and are well worth the climb. 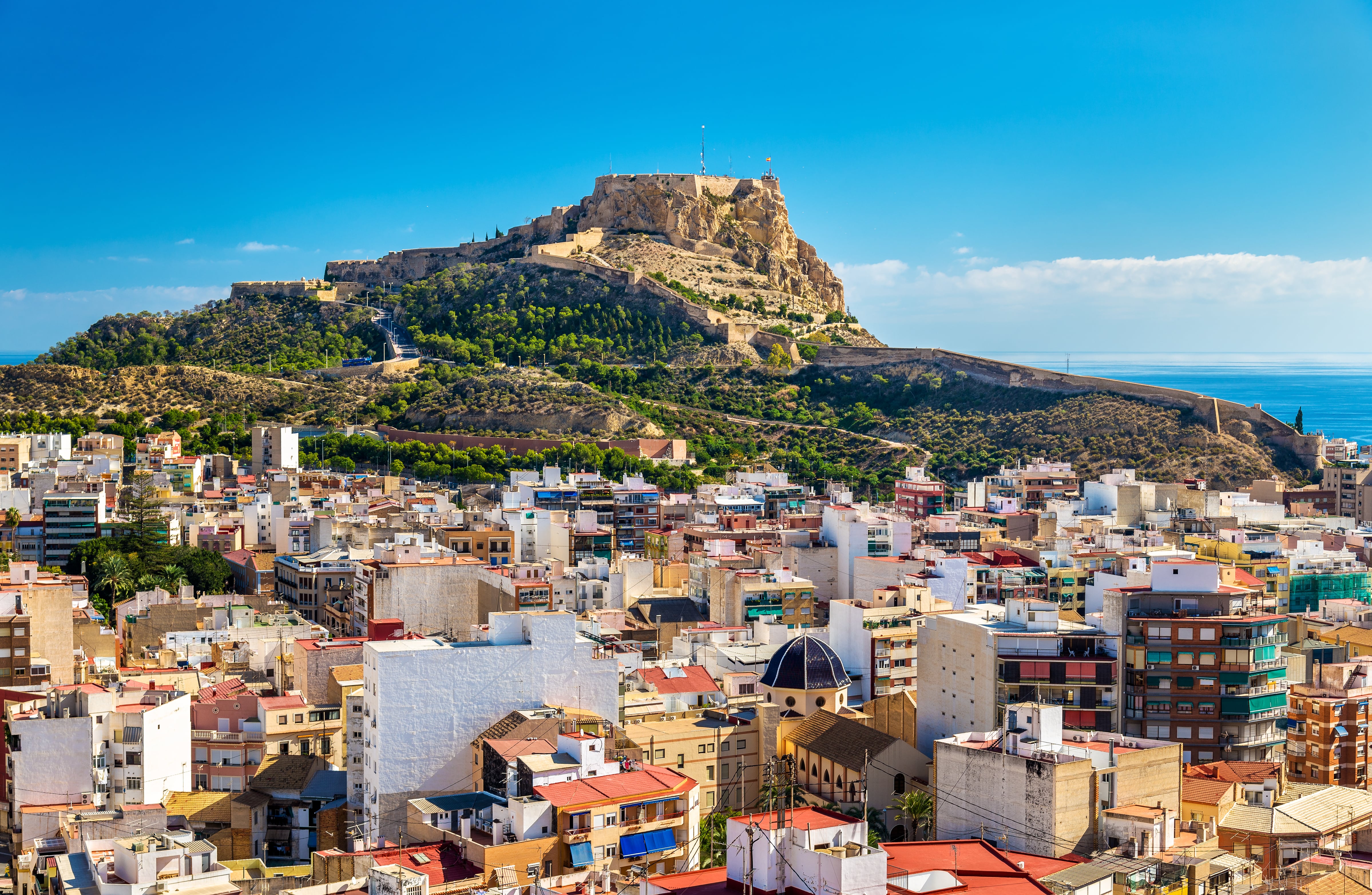 Given the region’s proximity to the Mediterranean and its historical ties, it will come as no surprise to discover that Alicante has an abundance of delicious food and drink options.

From tapas and paella to freshly caught seafood, there are numerous restaurants that serve both local and international dishes.

The fertile soils of the region provide plenty of fresh fruit and vegetables too – be sure to try the local grapes and cherries if you get a chance!

Alicante tram and train services link many destinations in the region, while buses also serve the smaller towns and villages.

International, regional and local bus routes run from the main Alicante bus station, while if you intend to regularly travel on the services, purchasing a travel card could help you to save. 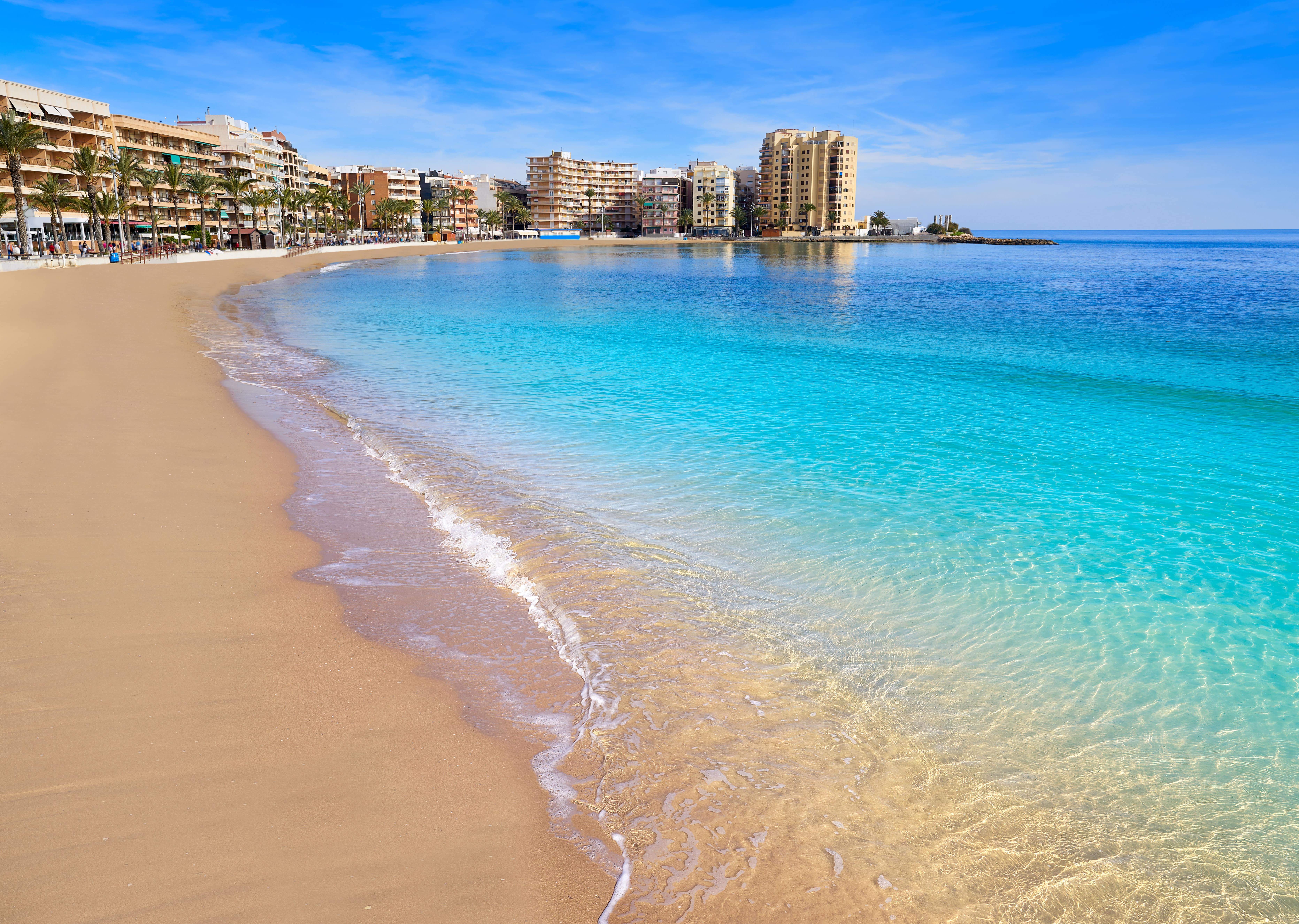 Alicante is served by Alicante Airport (ALC), also known as Alicante-Elche Airport, which is regarded as the gateway to the Costa Blanca region of Spain.

The airport is around six miles to the south west of Alicante city, and a similar distance from Elche, and is predominantly served by low-cost carriers including easyJet, Ryanair and Norwegian Air.

Alicante airport transfers are possible via taxi, which takes around 20 minutes to downtown Alicante, or via train or tram services. The C6 bus line links the airport with Luceros train station and Mercado tram station for Alicante tram services.

You can also travel to the popular resort of Benidorm, with Alicante to Benidorm transfers possible via bus or train – for the latter, you’ll need the C6 bus line and services from Luceros train station.

If you want more freedom when visiting the region, there are plenty of Alicante car hire services to choose from. Avis/Budget, Europcar, Hertz, Sixt and Record Go are among the car hire firms that operate at Alicante Airport.

Alicante rental car pick-ups can also be found in many of the major towns and cities in the region, so it may be cheaper to transfer to your destination before picking up a hire car.

If you do intend to hire a vehicle in Alicante, you may also want to consider purchasing car hire excess insurance before you travel in order to enhance your insurance cover and keep potential costs down. A policy with Questor Insurance could save you up to 80% compared with purchasing through the car hire company.