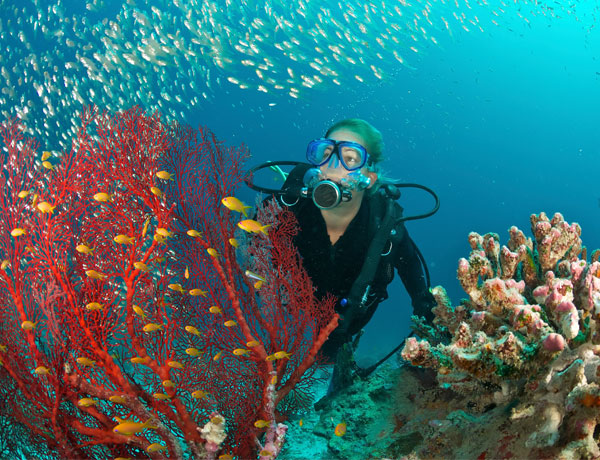 Scuba Diving can be a great way to relax and have fun while you’re on holiday, there is nothing more magical than entering the world under the sea and swimming next to nature. With the release of the ever so popular movie Finding Dory, we have put together a list of some of the top scuba diving destinations around the world.

Located between the coral reefs of the red sea and the desert of Sinai Ras, Mohammed is Egypt’s first National Park. Just off shore there are a number of the world’s most popular scuba diving locations including Shark Reef, Shark Observatory, Ras Ghozlani, Jackfish Ally and Anemone City. If you are looking to explore some caves then Jackfish Alley has a few small caves to explore and a number of sandy plateus home to a number of Stingray. The great thing about scuba diving in a Ras Mohammed National Park is that is can be visited all year round.

If you are looking to see as much sea life as possible Cape Kri won’t disappoint. Holding the world record for having the highest number of species referenced in one single dive you are bound to see plenty. Some of the fish and sea life which is frequently seen include; Moray Eels, Tuna, Scorpion fish, Sea horses, Sharks and Octopus.

To access Cape Kri a small boat journey to a drop off is required, once you arrive you can dive and explore waters of up to 30 feet in depth. Due to strong surface currents Cape Kri is recommended for experienced scuba divers.

Located in the coral triangle Kimbe Bay boasts the largest range of tropical fish and coral in the world. Some of the species which can be seen include Tuna, Jacks, Barracuda, Dolphins and a range of Sharks. When choosing to go scuba diving from Kimbe Bay you can either dive from a small boat journey or choose land base diving.

With Kimbe Bay being exceptionally important to marine since and research Kimbe Bay is protected with a conservation strategy which has a strict policy of “look but don’t touch” this is to maintain the reefs stay largely undamaged by humans.

Located in the Eastern Tropical Pacific, Costa Rica is home to the Cocos Island Marine Park. Cocos Island was formed during a volcanic eruption about 2 and a half million years ago, which has given it its unique shape and structure. The Island itself boasts plenty of wildlife both off shore and on land, being named one of the top 10 scuba diving spots by the Professional Association of Diving Instructors Cocos Island is not to be missed.

Kailua Kona Hawaii offers a simple twist to ordinary scuba diving by letting divers explore the depths in the dark. While enjoying your night time dive you will also get the chance to get up close and personal to the Resident Manta Rays. For those worried about bites and stings Manta Rays are great to get up close to as they are unable to bite or sting.

Considering scuba diving on your next holiday? At Questor Insurance we cover scuba diving between 15 & 30 feet in depth providing you hold the relevant qualifications and are not alone. Click here or contact us on 0333 323 0090 to find out more about our travel insurance.