The FCO (Foreign & Commonwealth Office) has released details of the ten oddest calls it has received in the past year, mainly coming from British expatriates or travellers. These include a caller asking for assistance obtaining illegal employment in Singapore, a home sick expatriate asking where they might find some English bacon, a mother asking for contact details of a young British YouTube star because her son was a fan of his videos, a man planning on moving to Spain who was concerned that he might see nudists walking the streets.

“our staff are a helpful bunch and do an amazing job helping out brits in trouble around the world” as stated by FCO Minister James Duddridge, “but it is important that people remember they are there to help with genuine emergencies and not as an alternative to directory enquiries. Every minute they spend handling a call requesting advice on butlers or nudists is time taken away from dealing with life and death cases, so I urge the public to think before picking up the phone.” 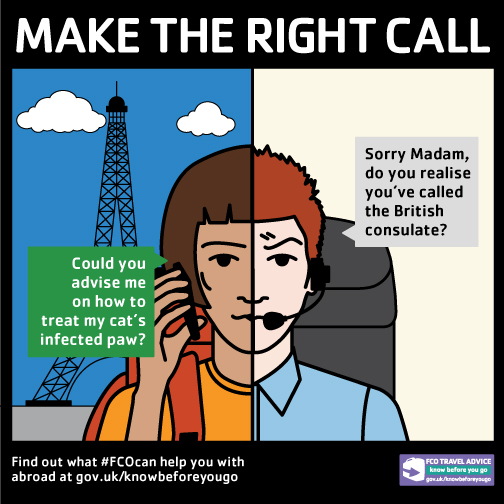 Over the past 12 months, the FCO has replaced nearly 40k misplaced travel documents, came to the aid of 4,770 British Travellers who had been arrested abroad, helped 3,250 Britons who had needed to stay in hospital and rendered assistance to the relatives of 3,670 Britons who had passed away while abroad.

The FCO has also revealed that they have joined forces with comparison site Gocompare in an attempt to raise awareness of the importance of adequate travel insurance coverage, with a main focus on the need for cancellation cover.