Where to immerse yourself in green all year round

Winter gardening traces its roots back to the Victorian period when municipalities began building large conservatories for the enjoyment of their citizens. The original conservatories were built as the convention centres of their day, they were the site of concerts and dances. After WWI these large conservatories fell out of favour due to the high costs of maintenance and heating. In the late 20th century, thanks to the advances in heating technologies they saw a resurgence, some of the grand conservatories retrofitted and reopened.

Orangeries - For those of you who think “Orangery” sounds like something of a mystical term taken from a period drama, you’re not actually far off.

Between the 17th and 19th century, if you were wealthy and part of the “fashionable” elite, the chances are you would have had an orangery (or orangery) within the grounds of your home. Similar to a greenhouse, the extension was used for growing citrus trees in an environment that protected them from frosty weather to survive the winter months. The concept of an Orangery was born in Italy and architecturally adapted in Holland, and soon became viewed as a status symbol among the wealthy.

Conservatories - It is generally accepted that Conservatories were created as a by-product of Orangeries – the differentiation being that they were more for the protection of shrubs and herb plants than fruit. A glass ceiling and wall allowed an optimum amount of light into the structure so the plants could grow more rapidly.

Another slight differentiation is that conservatories tended to be built as an attachment onto the home, whereas that wasn’t necessarily the case with an orangery, which could be its own supporting structure elsewhere within a garden. This contributed significantly to the change in viewpoint that the space didn’t have to be used solely for plantation but could offer an extension to the home.

Glasshouses - Prior to the mid-19th century a ‘glasshouse’ was an object of awe to the majority of the population. The combination of the window tax and the glass tax made even the smallest conservatory remarkable and put glasshouses far beyond the reach of the average squire. The construction of large glasshouses were strictly for the social elite and their commissioning was a powerful expression of wealth and status.

Surviving glasshouses and their surrounding gardens represent a unique legacy of Victorian and Edwardian society. Significant in terms of their architecture and design, they are also expressions of social and industrial progress during those periods. 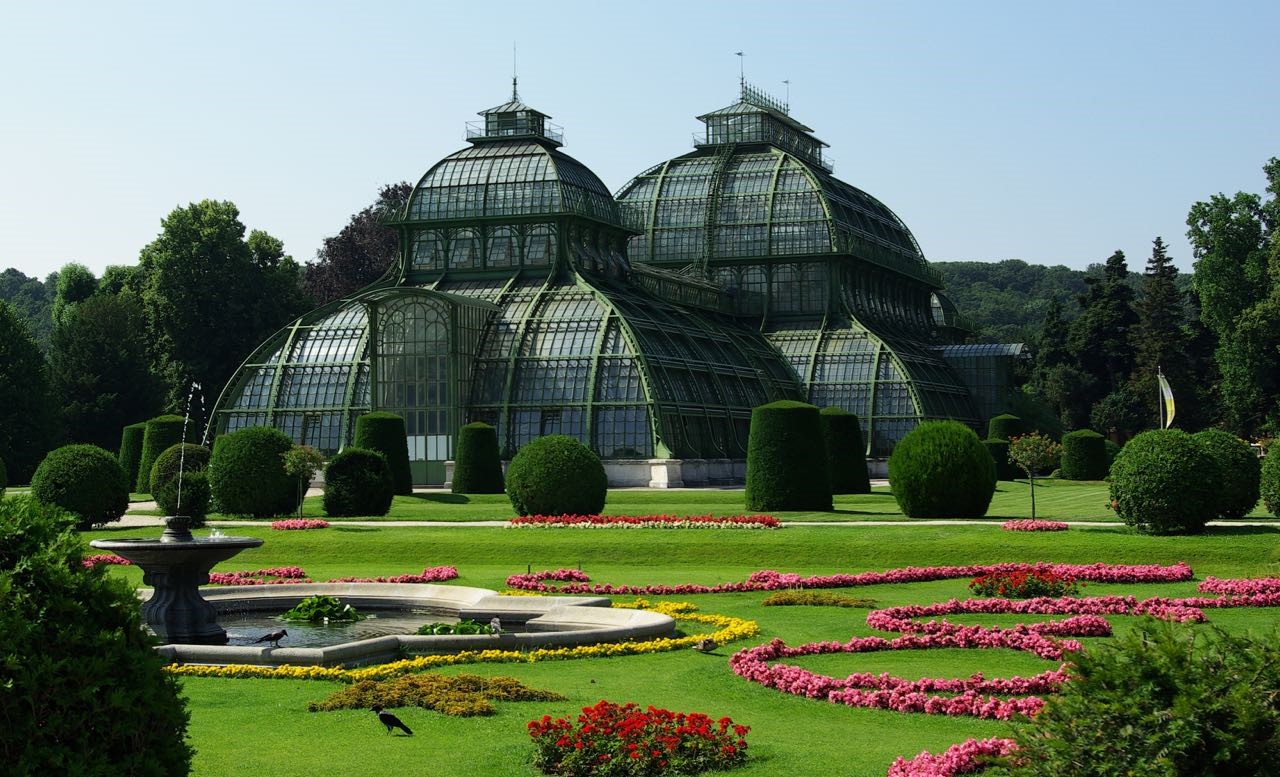 12 impressive Glasshouses to visit around the world:

2. Austria Palm House at Schönbrunn Palace Park in Vienna. Composed of 45,000 sheets of glass, it is the largest glasshouse in continental

Europe. Constructed in the 1880s, it is now a UNESCO World Heritage site.

3. UK London’s Kew Royal Botanic Gardens where the famed Temperate House was built in 1860 by Decimus Burton to house the region’s growing collection of temperate plants collected across the globe. Measuring 52,527 square feet, it is the largest Victorian glasshouse in the world.

4. Denmark The Palm House, part of the Botanic Garden at the Natural History Museum of Denmark in Copenhagen; built by Carlsberg Breweries founder J. C. Jacobsen in 1874.

5. USA The Victorian-style Enid A. Haupt Conservatory at the New York Botanical Garden boasts a 90-foot-high central Palm Court and 11 interconnected galleries, which house different habitats. Completed in 1902, it was declared a New York City Landmark in 1975 and now contains tropical and desert plants for study and exhibition.

6. Ireland Completed in 1840, the Palm House at Ireland’s Belfast Botanic Garden is one of the earliest examples of the Victorian greenhouse. The curvilinear Palm House was designed by architect Charles Lanyon and built by ironworker Richard Turner—one of the first builders to assemble prefabricated materials such as glass and iron on-site.

7. Brazil Botanical Garden of Curitiba - This glasshouse may resemble the French greenhouses of the 19th century, but it was actually designed by Brazilian architect Abraão Assad in 1991. The greenhouse features fountains, waterfalls and lakes amongst their flora and fauna.

8. Belgium. Given his relation to England's Queen Victoria, it's no surprise that King Leopold II wanted a greenhouse just as grand as the Crystal Palace when it was built in 1851. The Royal Greenhouses of Laeken were completed in 1873 from designs by Alphonse Balat to look like a glass city placed atop Brussels' greenery.

9. GermanyY It shouldn't be a surprise that one of the more modern greenhouses sits at the heart of Germany in Frankfurt. The Palmengarten Botanical Gardens was built in the 19th century and offers an experience of climates from around the world. It also holds the Goethe Garden, an homage to Frankfurt's famous poet and avid gardener Johann Wolfgang von Goethe.

10. Australia One of the newer gardens, the Adelaide Botanic Garden's Bicentennial Conservatory, was built in 1988 from designs by Guy Maron. It is hailed as the largest single span conservatory in the Southern Hemisphere, built in celebration of Australia's bicentennial. Unlike the other greenhouses, visitors can experience more of the southern climates, with flora from Australia, Papua New Guinea, Indonesia, and nearby Pacific Islands.

11. India The Lal Bagh Botanical Garden is the home of India's largest collection of tropical plants. The garden was commissioned by the ruler of the Mysore Kingdom, Hyder Ali, in Bangalore, India in 1760. It was later developed further by Hyder Ali's son, Tipu Sultan, and later still by British and Indian doyens of horticulture. They added a number of plant species, and extended the gardens. The name means Red Garden in English, and along with the plants holds an aquarium and lake.

12. Spain The Palacio de Cristal in Madrid's Buen Retiro Park is a historical heritage and botanical garden that once was an escape for Spain's royal family.

The crystal palace was built in 1887, the building itself is in the shape of a cross, perhaps due to the influence of the country's Catholic kings.

Source for some descriptions of the listed greenhouses: http://diply.com/i-love/article/worlds-best-greenhouses/4