A history of sandals – the ultimate gadget of the summer

The origin of sandals is pre-history and extends long before today’s plastic flip flops; sandals have beautified feet since the beginning of civilization – Ancient Greeks and Romans wore sandals and boots made from leather and wood. Romans had hobnail boots, bath clogs, leather shoes but they hadn't mastered shoe laces. Sandals have been the primary form of footwear in ancient Mesopotamia, Egypt, Greece and Rome as well as Asia and central and southern America. Wealthy Greeks and Egyptians wore sandals decorated with jewels and gold. Roman developed sandals with thicker soles, leather sides and laced insteps. 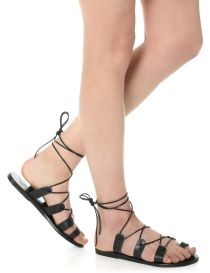 The simplicity and creativity of ancient Greek footwear will influence generations to come. Footwear was an integral part of Ancient Greek culture. The rugged soles of these shoes were excellent to tread rocky terrain, designed for the outdoors they offered the wearer protection and comfort. Because of their durability, numerous designs of these shoes were worn in military combat by soldiers. The uppers of these boots consisted of a cross stripped design.

Zori and Geta are a form of traditional Japanese footwear that remains popular and widely worn in Japan today. They are simply constructed with a base to support the foot and a strap for the toes to grip.

Did you know that zori and geta are good for you?

Zori and geta exercise the muscles of your feet and promote good posture. They also allow for free circulation of air around the feet. Good for your feet and foot health!

3. Ancient Egypt – golden sandals to accompany the Pharaohs in the afterlife

These Gold sandals belonged to the funerary accoutrements of an Egyptian queen of Thutmose III in the middle of Dynasty 18. Similar gold sandals were found on the mummy of Tutankhamun, one of Thutmose's descendants who ruled at the end of the same dynasty.

People in Central and South America went barefoot most of the time. The warm climate did not require clothing for warmth. However, foot coverings did make the rugged terrain easier to manage. Mayan, Aztec, and Inca royalty and soldiers wore various styles of sandals. Typically these sandals were made of leather from a goat, llama, or sheep, or from plant fibres and tied to the foot with leather or woven fabric straps.

5. Venice - the birth of the platform heel: the “chopines” 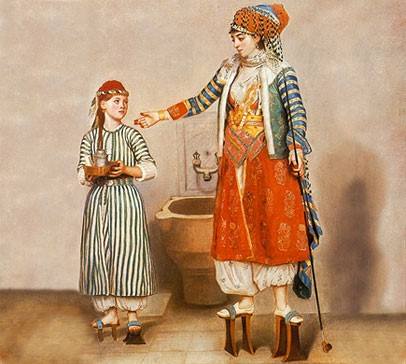 Chopines were platform shoes worn by women in the 15th, 16th and 17th centuries.   They protected the shoes and dress from mud and street soil. In Venice, the chopine was worn by women of the nobility and by courtesans. It became a symbolic reference to the cultural and social standing of the wearer: the higher the chopine, the higher the status of the wearer. During the Renaissance, they became a regular article of women's fashion and became more and more loftier as the years went on. Some were over 20 inches in height.

Shakespeare joked about the extreme height of the chopines by using the word altitude in Hamlet when the prince greets a lady and notes how much "nearer to heaven" she had grown since he last saw her — "by the altitude of a chopine."