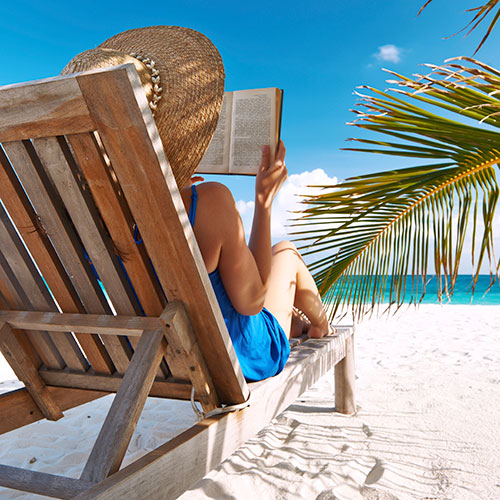 Every year on the 23rd of April World Book night takes place between 7:30 pm and 9:30 pm. World book night is ran by the reading agency which is a national charity set up to inspire people to become confident and enthusiastic about reading. To show our appreciation to our favourite books, we have put together a list of our favourite holiday reads, great for reading on the plane or while relaxing beside the pool.

Take a look below at some of our favourite books to pack for your holiday:

I love Capri by Belinda Jones - A fantastic story about a woman finding herself and the love of her life while visiting the magical island of Capri. The perfect book to uplift you while at the beach or pool side, you will be captivated from the very beginning!

Neuromancer by William Gibson – Love sci-fi and technology? William Gibson’s Neuromancer gives you both in one of the most influential and inspirational science fiction reads. Within this book the concept of a virtual reality and what we know as the real world is merged, this is a book to really get your brain ticking.

Jemima by Jane Green – Jemima is a delightful chick lit read! Jemima is slightly overweight and treated poorly by her room mates, pushed from all directions we see Jemima reinvent herself online. Within the book we follow the journey of a woman learning who she truly is, as well as becoming the woman she always wanted to be. The story has a clever concept of retelling the childhood classic the ugly duckling.

An American Caddie in St. Andrews by Oliver Horovitz – A fantastic read for all golf lovers, immerse yourself in to the captivating story about a high school graduate taking a gap year in St. Andrews and enrolling on a caddie trainee programme. A definite essential to pack for anyone jet setting to a golfing holiday.

The Fault in our Stars by John Green – A beautiful yet heart breaking love story of two teenagers meeting at a cancer support group. This book will have you laughing at its dark humour and crying all at the same time, a book which will have you begging for more.

The Game of Thrones by George R. R. Martin – The first volume to the ‘A Song of Ice and Fire’ fantasy series. An engaging story set in the fantasy world of Westeros, which will hook you in at the very beginning with its political intrigue, dragons and threat of the white walkers and their undead army.

The Humans by Matt Haig – An engaging story about a university of Cambridge professor who manages to solve one of the world’s greatest riddles and then disappears! When he is later found he is not the same, seeming almost alien.

The Magic Cottage by James Herbert – The perfect story to read while on a weekend getaway, especially in the evenings curled up by the fire. Be enchantedbythe story of a magical cottage with a dark secret, the cottage first begins as the perfect paradise and then soon becomes a spooky hell.

Gone Girl by Gillian Flynn – Don’t forget to pack Gone Girl an essential holiday partner in crime. On the morning of Amy and Nick’s fifth wedding anniversary Amy is missing. All fingers point quickly at Nick once evidence he has not created is found on his computer.

Angels by Marian Keyes – An addictive read about a woman who has never set a foot wrong in her life unexpectedly taking a walk on the wild side. Maggie leaves her husband to runaway to Hollywood with her best friend to board a journey of self-discovery.